What local top e-commerce players did for Malaysia’s 11.11 Shopping Festival

For those who are unfamiliar, 11.11 is an annual shopping festival filled with tempting deals made famous by China. It is the equivalent to Black Friday in the US. For giant Alibaba Group itself, they generated over US$10 Billion GMV within the first hour of the shopping festival to a total of US$31 Billion in 24 hours. If you’d like to know more about how massive it is in China, you can read the rundown on a liveblog from Alizila HERE

In Malaysia, online shopping was either unheard, untrustworthy, or more expensive compared to retail five years ago. This all changed throughout the years as local e-commerce players focused on improving accessibility, convenience, and affordability; you can now pretty much find and buy anything on these platforms.

As the e-commerce market continues to mature, it opens up opportunities for these brands to launch more sale event, including emulating China-famous 11.11 sale festival. These brands invest heavily in their marketing for each sale festival to ensure customers shop on their website during this period; this includes marketing on traditional and digital media.

One of these digital media, influencer marketing on itself has been a staple marketing tool for these brands to cut through the noise and present their brand favourably to the audience.

For Malaysia’s 11.11 2018, we observed three players in the e-commerce space, namely Lazada, Shopee, and Taobao investing considerably in influencer marketing, (also known as KOL Marketing or Wanghong in China). Their influencer marketing objective was simple, reach these tech-savvy millennials on Instagram with social media influencers they could relate to. These could be housewives, professionals like doctors or fitness trainers, celebrities, and college and high school students.

We collected data for over 1,000 influencers posting on Instagram during this period and will be focusing on only three companies, namely Shopee, Lazada, and Taobao Malaysia. For ease of reading, we have segregated the difference of influencers by follower sizes and according to SushiVid’s standard as there is currently no official industry standard.

Influencer Category Based on Follower Size

Based on our analysis, each of the three has its own unique approach for influencer selection for their 11.11 marketing campaign.

Worked with several Chinese mid-tier, high-tier, macros, and alphas level influencers to promote Tmall, which comes as no surprise as their platform is mainly in Mandarin. The influencers are mostly females.

Collaborated with a mixed-race of seeders, micros, and Malay-centric alphas. Profile of influencers is of male and female Malay-centric for alphas and mix race and gender for other influencer tiers.

Engaged a mix of mid-tier, high-tier, macros, and a small number of alphas. The profiles of their influencers are an even race mix of male and female. 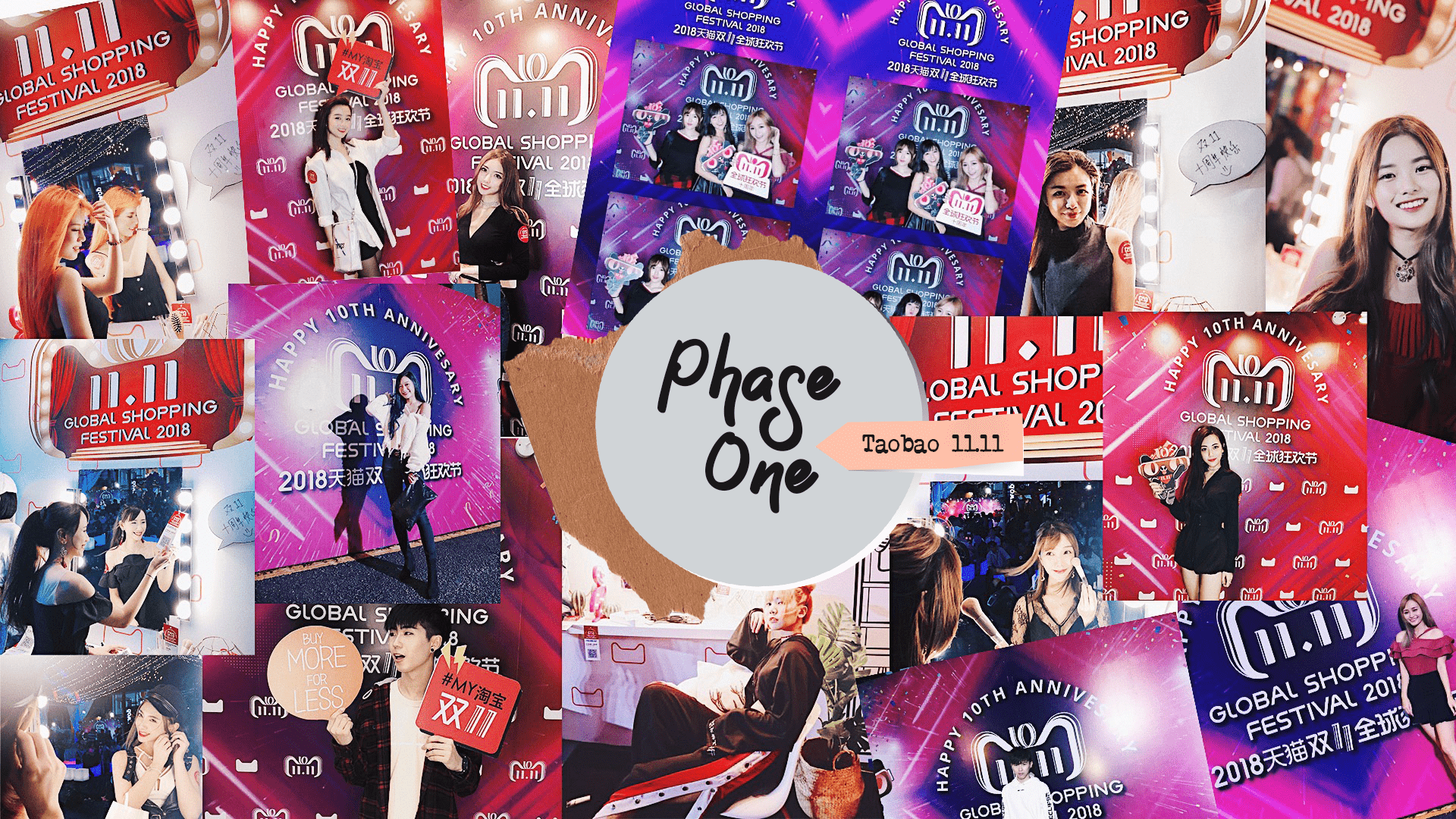 The first phases involve the majority of alpha influencers at their media launch in early November. Caption direction was to build up anticipation amongst the audience by letting them know the return of Taobao 11.11 sale. Visual-wise, they were to take a picture of themselves or with friends in front of the Taobao 11.11 backdrop. 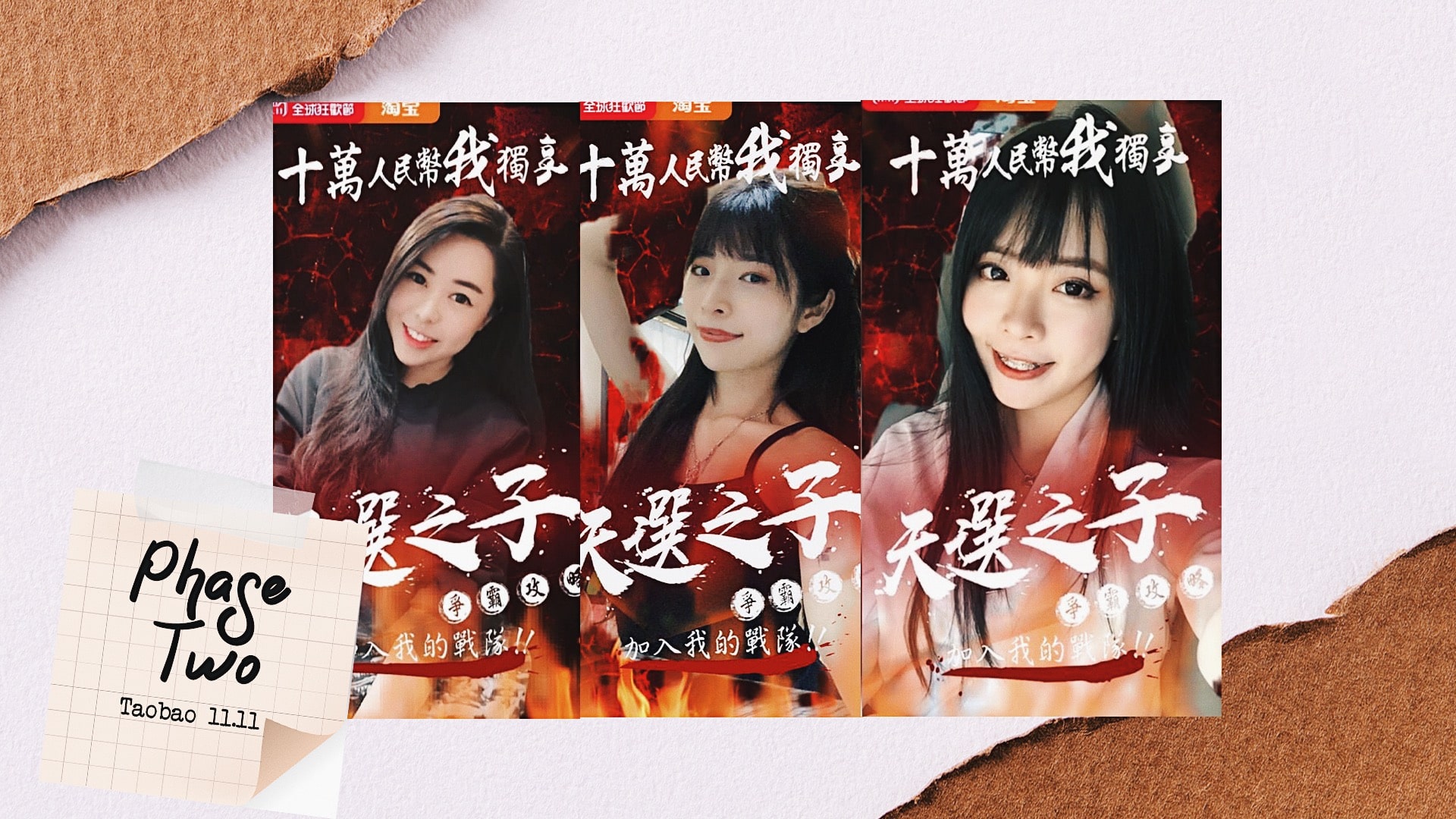 The second involves influencers from mid-tier, high-tier, macro, and a small set of alpha tiered influencers. Their key message is to get their audience to join Taobao referral program contest to stand a chance to win 10,000 Taobao points. Their visual guideline is to add a Taobao filter to all their pictures. 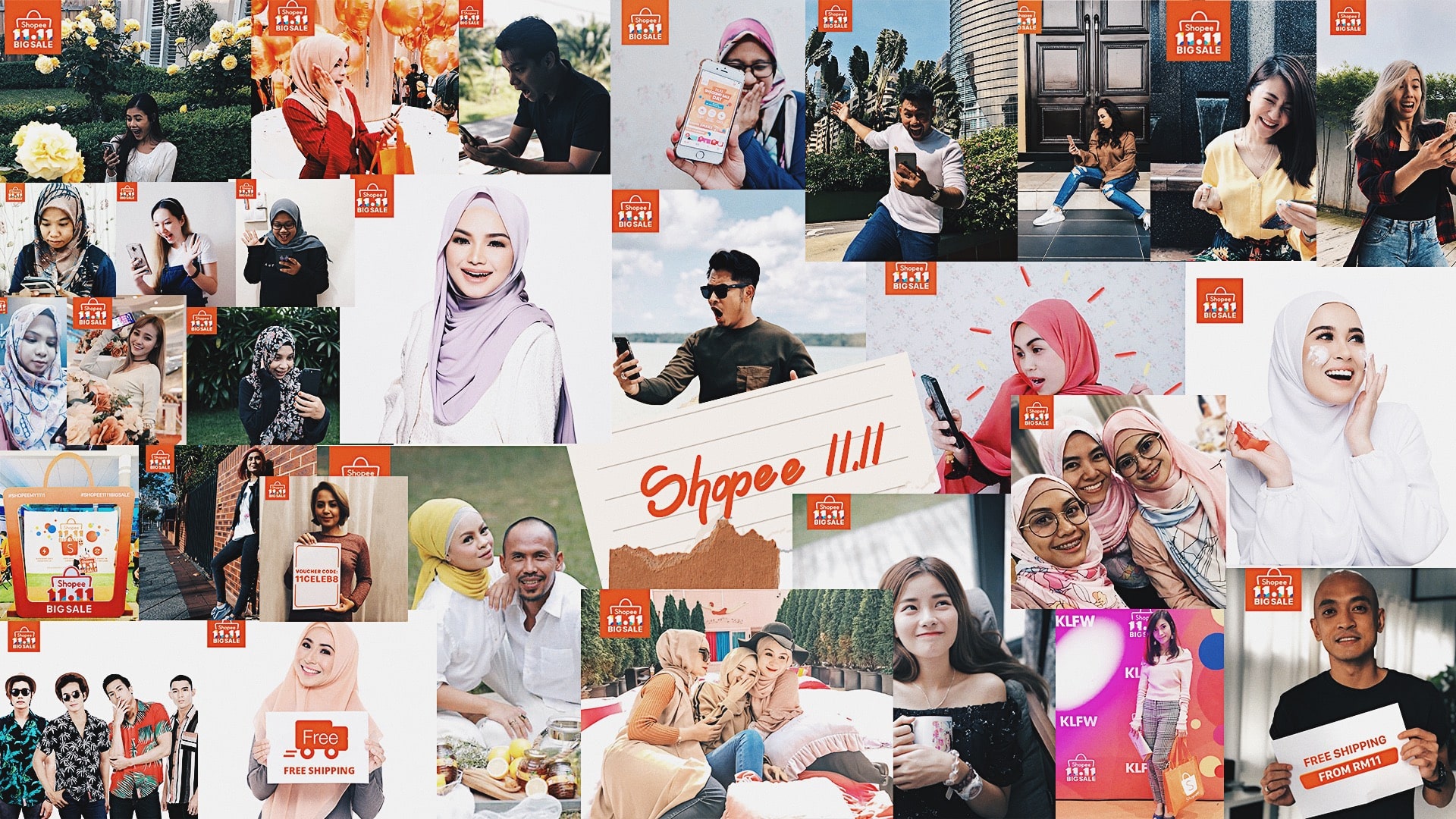 Had one overarching direction for all the seeders, micros, and alphas. Promote Shopee 11.11, and each posted content must have the signature Shopee sale branding at the top corner of the content. Visual-wise all the postings were either influencers looking at their phone or showing it with a Shopee landing page to the audience. 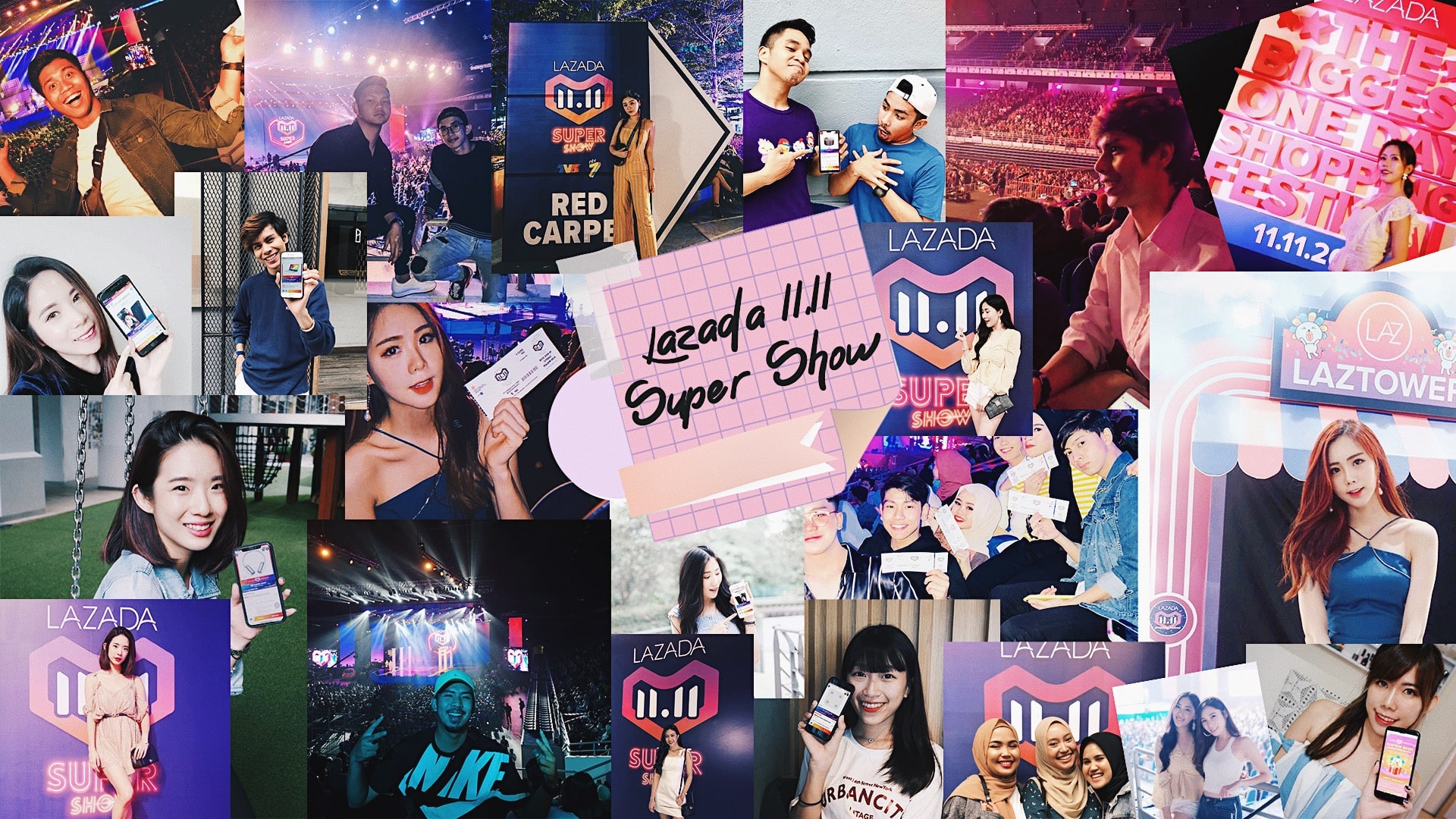 More complicated than the other players as they engaged influencers to do a series of postings with differing content direction.

In total, there were about 300-400 social media influencers who participated in campaigning for these three brands. Based on the expected cost of these influencers, we came out with some data to see which had the best value in engaging the influencers.

At first glance, it looked like Shopee’s performance was really bad, when in reality, they played a different game. Their competitor’s campaign performance benchmark was the cost for engagement, for Shopee, it was total reach. Of the three, Shopee engaged more than triple the number of influencers, and the total followers far exceeded both competitors by at least 4.5 times. Shopee had a total of over 27 million followers, compared to Lazada’s 6 million, and Taobao, 5 million. Shopee’s cost per reach was at RM0.005, compared to RM0.02 by Lazada, and RM0.03 for Taobao.

There is nothing wrong with both approaches as it depended on their overall objective and selected benchmark. Shopee aimed to get as much reach as possible, and this enabled them to engage a high number of influencers and also celebrities. Some of Shopee’s stars were Dato’ Siti Nurhaliza, Nana Mahazan, Shuib Sepahtu, Emma Maembong, Tomok, and many more. Lazada and Taobao on the other hand, spent less on the influencers and more on created events. Both launched their own 11.11 campaign, Taobao with their media launch, and Lazada with the 11.11 SuperShow concert. The cost of these events were not taken into consideration when writing this article.

How have these brands kept up with their influencer marketing efforts in 2019? 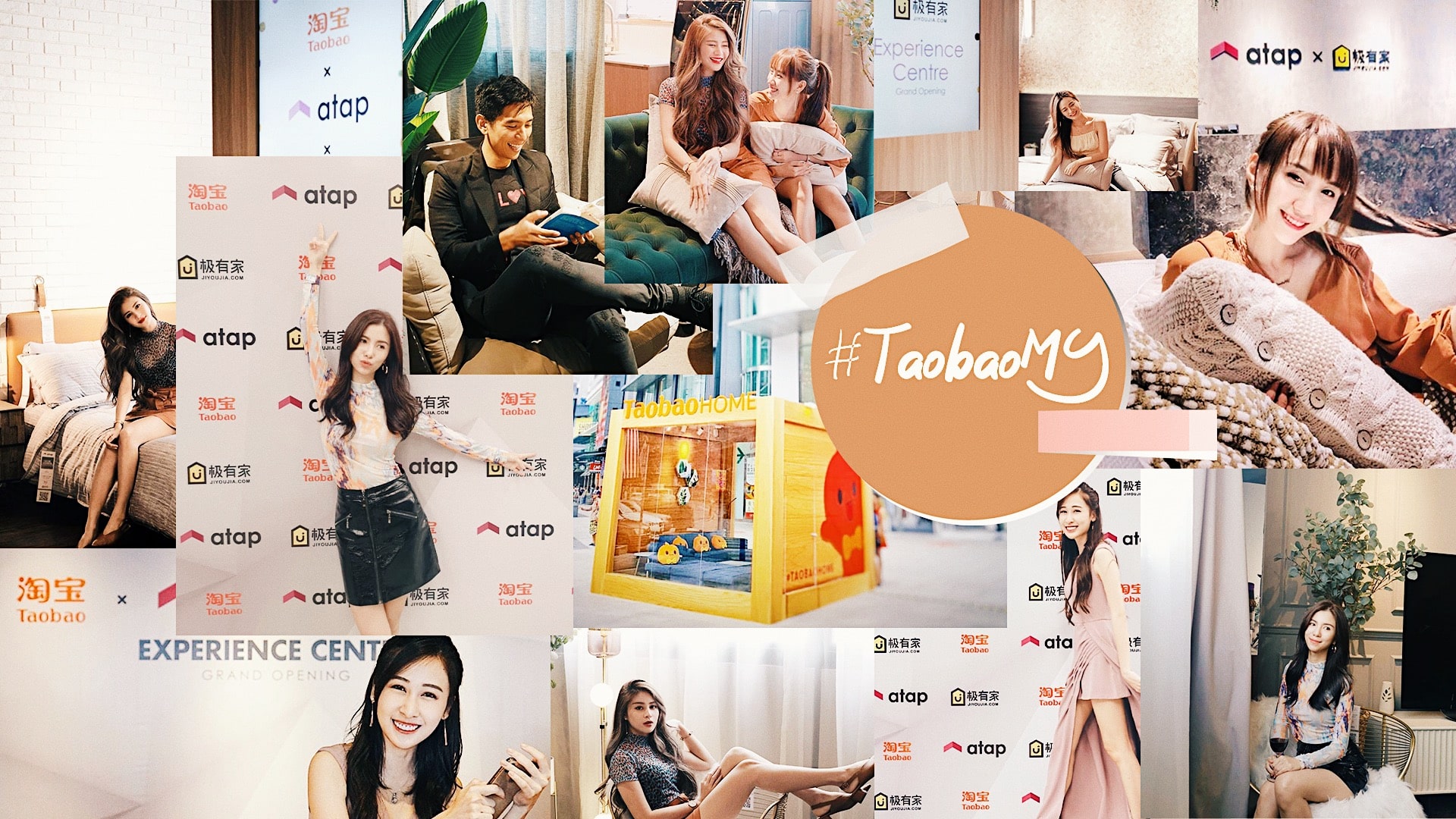 Taobao has so far only engaged a small number of influencers for a campaign in June, we do however expect this to change when 11.11 comes. Why? Taobao created 11.11 and provides the most diverse product only available in China compared to other platforms. 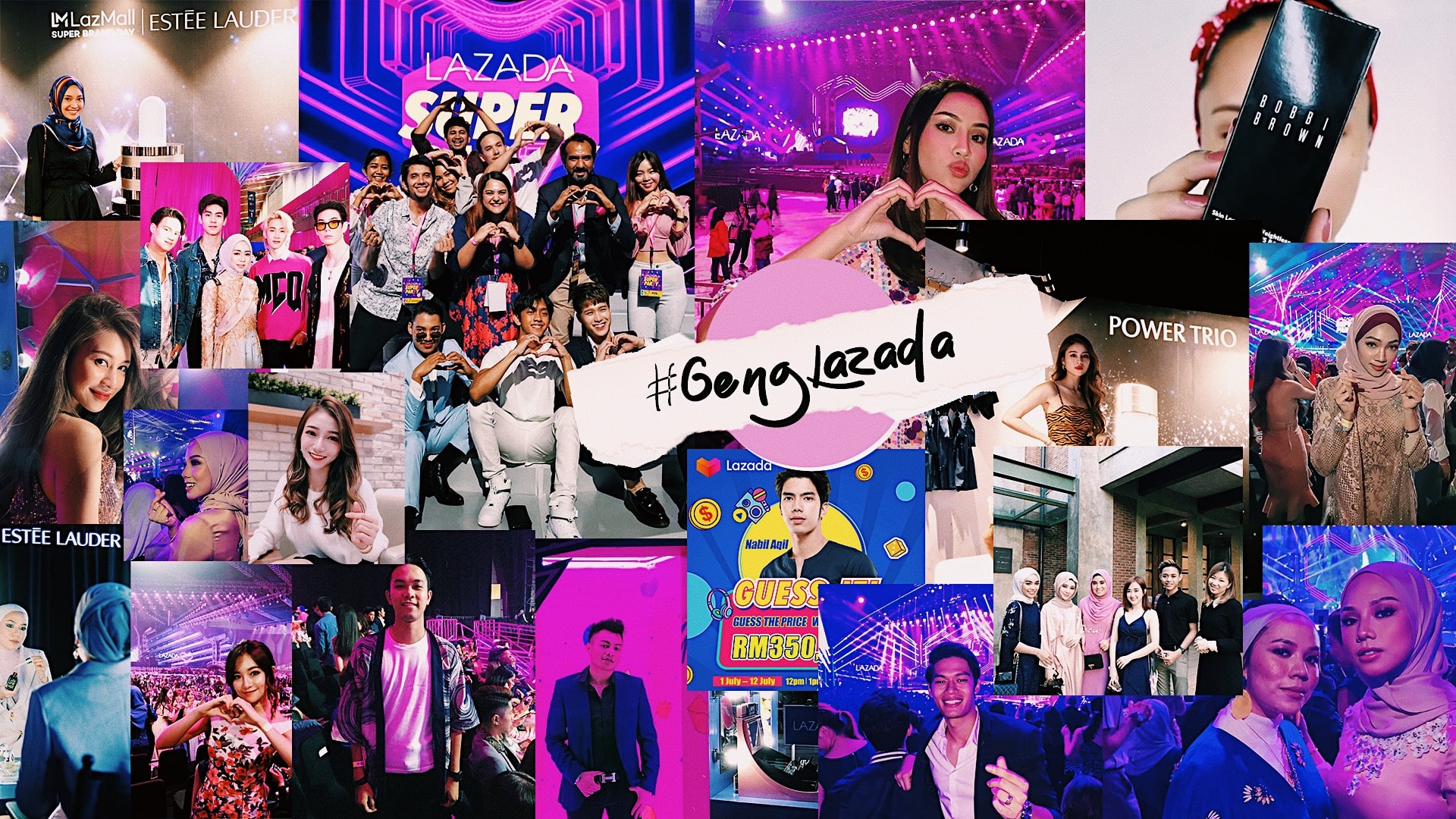 Lazada has also prominently utilised influencers for almost all of their 2019 campaigns with the most significant undertaking was flying off 200 influencers to Jakarta, Indonesia. Consisting of mostly mid-tiers and alphas the influencers were treated to a string of performances by Agnes Monica, Dua Lipa and at the Lazada 7th Birthday SuperParty. You can have a look at their 2019 influencer campaigns HERE. 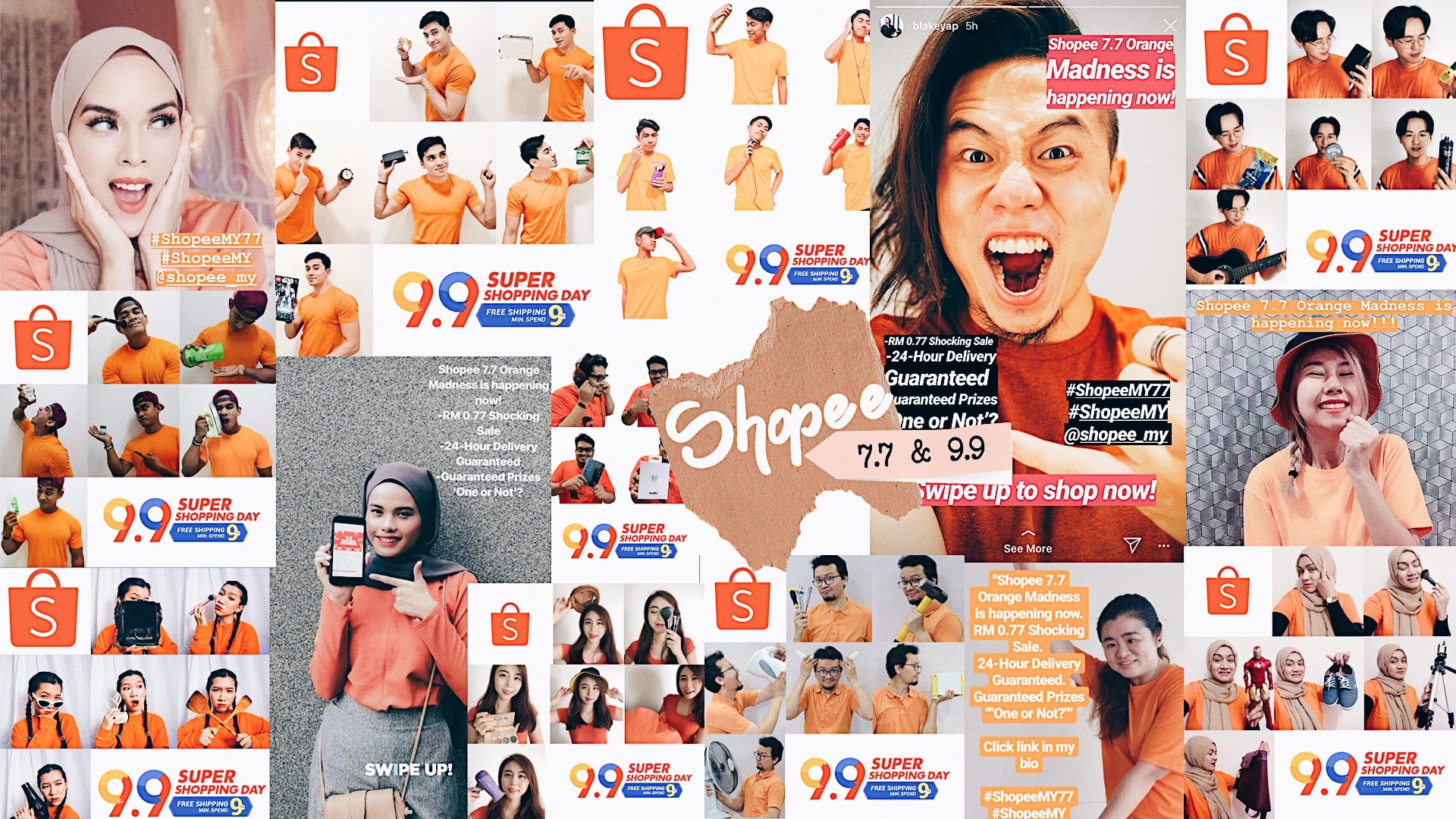 Since 11.11, Shopee has gone all out in engaging social media influencers including celebrities. Just open the #shopeemy tag on Instagram, and you can see a range of different campaigns that they have done. They have also gone one step further by making legendary football player, Cristiano Ronaldo as their brand ambassador.

What can we expect for 2019’s 11.11 Influencer Marketing campaigns?

A recent study by Nielsen (Nielsen Global Consumer Loyalty Survey, Q1 2019) found 44% of Malaysian consumers love trying out new products. A further 47% prefer sticking to known brands but can be persuaded for a change. What can we learn from this? New brands can undoubtedly gain a foothold in establishing themselves against more well-known brands. Established brands will take this information to mean they should continue if not increase their marketing efforts to build and strengthen their market share. 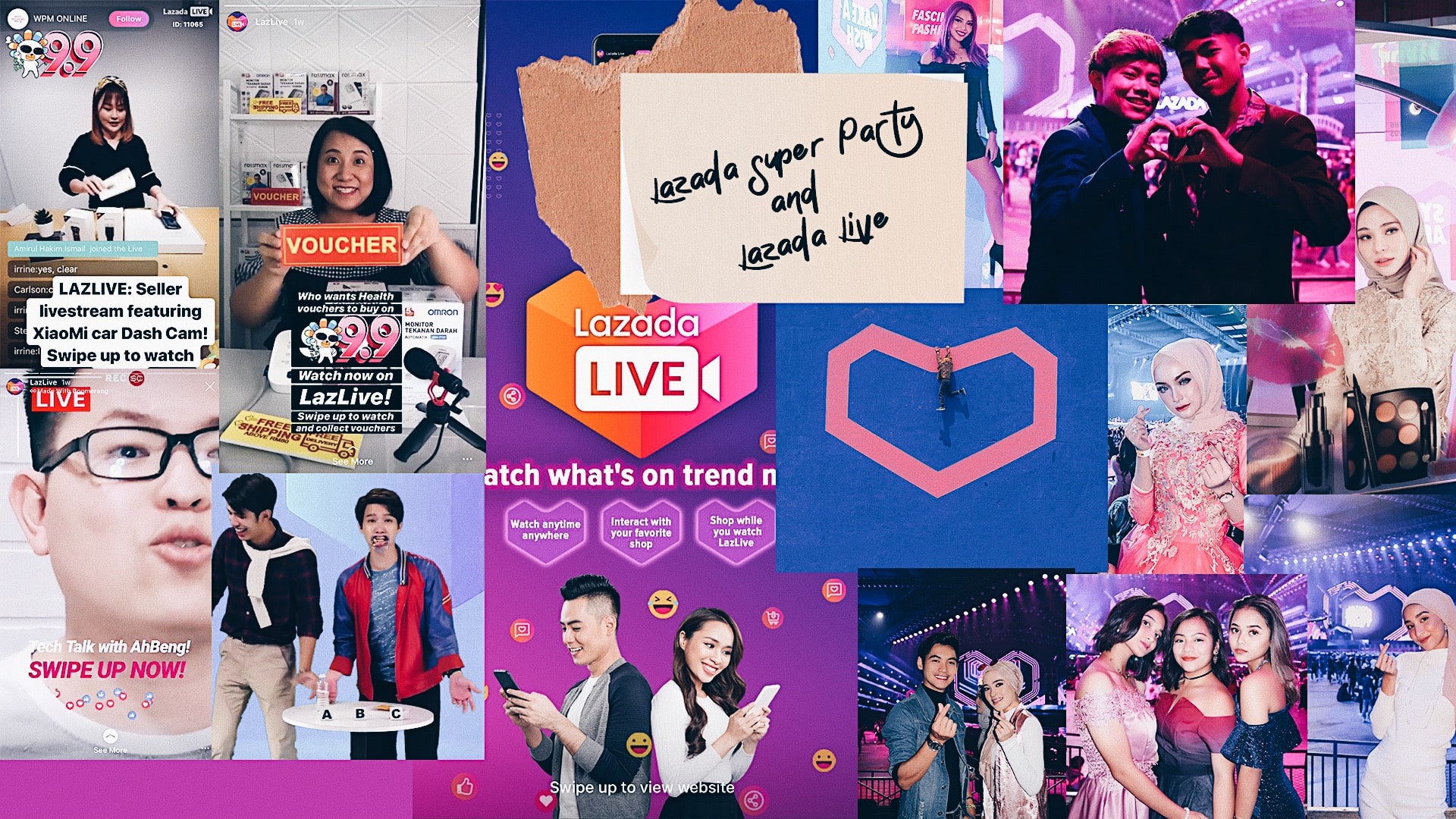 With this mentality in mind, we should expect more of the same influencer marketing effort by brands with minor additions such as live streaming. Lazada first experimented their live-broadcasting capabilities with last year’s 11.11 SuperShow celebration and this year’s Super Party concert in Jakarta. With its success, they have expanded it to live streaming shows featuring well-known personalities such as Sean Lee, Maggy, Wang, Aiman Tino, and more. 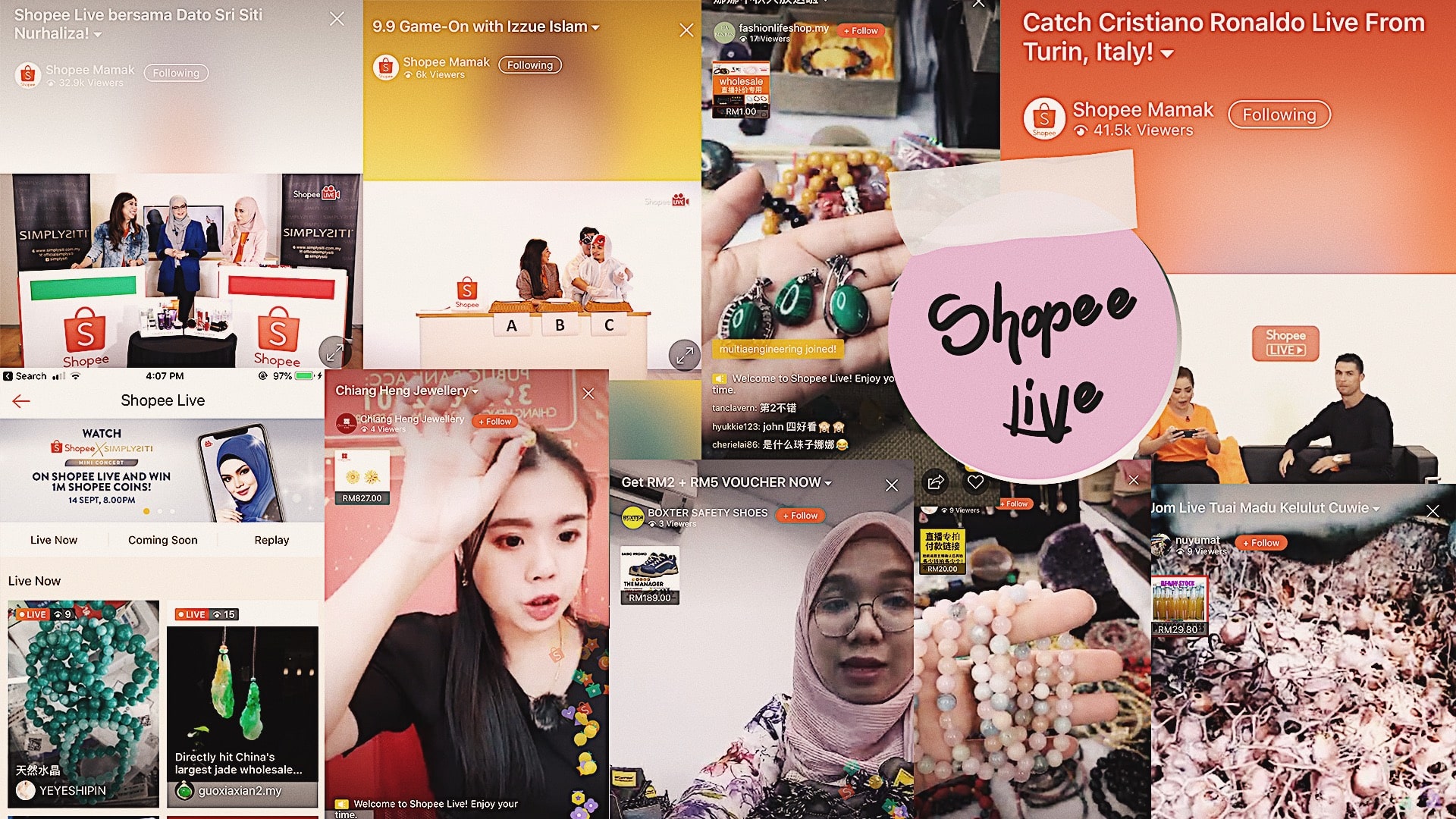 Shopee has also started their own branded live streaming shows featuring KOLs and has even granted access to verified shops and users to host their own live stream on the app. Named Shopee Live, it had its first success story when they recorded over 2,000 orders for a new lipstick product by Tyra Kamaruzzaman within minutes of live streaming. This development opens up a possibly a new influencer model involving cost-per-sale (CPS) that is very synonym with live-streaming in Taobao China.

It would be fascinating to see what these giants will do this year on 11.11. Will it be the same influencer strategy with live streaming backing up their overall digital marketing strategy? Or perhaps some other new players come in with an even new approach to influencer marketing?

What about your brand? Are you thinking about launching your very own 11.11 influencer campaign? Then check out our 11.11 Package prices to see what SushiVid has on offer and get in touch!

Questions? Feedback? Get in touch with the author at wen@sushivid.com

*Disclaimer - This is based on information available via social media and some estimations based on SushiVid's experience working with over 500 brands and 30,000 branded contents.